TiPED > Tiers > What is Endocrine Disruption

The endocrine system uses chemical signals—hormones—to direct development and reproduction, regulate body function and metabolism, and influence behavior and immunity [2]. In its broadest sense, endocrine disruption takes place when an agent alters hormone signaling or the response to hormone signaling, and in so doing alters some aspect of the organism under hormonal control. According to the Endocrine Society, the world’s authoritative scientific association of clinical and research endocrinologists, an endocrine-disrupting chemical (EDC) is an exogenous chemical, or mixture of chemicals, that can interfere with any aspect of hormone action [3].

Endocrine disruption can be caused by diverse mechanisms. Hormones work by binding with protein receptors in the cell membrane, the cytoplasm or the nucleus. Binding initiates gene activity or physiological processes (depending upon the receptor, its location, hormone concentration, and the developmental state of the cell/tissue/organism) that are part of and essential to normal organismal function. EDCs work by interfering with that signaling process. They are not necessarily structurally similar to hormones; many, but not all, are lipophilic.

Mechanisms of action include: the EDC binds to the receptor and adds to the normal signal; the EDC binds to the receptor and blocks the normal signal; the EDC affects hormone synthesis (increasing or decreasing the amount of natural hormone that is available for signaling); the EDC alters hormone metabolism or hormone transport and storage within bodily tissue (again, increasing or decreasing hormone amount); and/or the EDC affects the levels of mature hormone receptor via disruption or modulation of gene expression, folding, or transport.

A central part of the phenomenon of endocrine disruption is receptor binding, which depends upon the molecular conformation of the hormone and its receptors. Molecular structure is a good, but imperfect predictor of whether binding will occur; chemists can use information about structure both to predict potential hazard (described below) as well as to guide manipulation of a chemical’s structure to avoid hazard.

A crucial aspect of hormone action is that it takes place at extremely low concentrations.  For an estrogen, for example, typical physiological levels of the biologically-active form of an estrogen are extremely low, in the range of 10-900 pg/ml (high parts per quadrillion to low parts per trillion). This is possible because of the specificity of hormone binding to its receptor, and is biologically necessary because of the large number of signaling molecules present at any one time. Specificity and extreme sensitivity make it possible for an enormous number of signaling molecules to co-exist in circulation [4] without disrupting each other’s signaling. The specificity also evolved, presumably, to reduce or avoid disruption by exogenous compounds with which organisms have had evolutionary experience.

Within the past century, over 80,000 new chemicals have been synthesized and used in ways that have resulted in widespread human exposures.  A subset of these chemicals are toxic; a subset of these toxic chemicals are toxic due to endocrine disruption.  A small number of these chemicals have been created explicitly to alter hormone signaling, e.g., the estrogenic drug diethylstilbestrol and many pesticides (for target species). Other chemicals have molecular structures that unintentionally bear sufficient resemblance to hormones such that they are capable of binding, with varying degrees of affinity, to hormone receptors, or of interacting at the molecular level with other molecules involved in hormonal activity. Often EDCs are much less potent than the endogenous hormones in binding with receptors. An increasing number of examples appearing in the peer-reviewed literature, however, show that in some signaling pathways exogenous hormone-mimics can be equipotent and capable of provoking biological responses at picomolar (pM) levels or lower.[5] 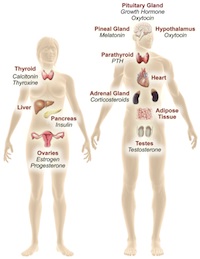 arch on EDCs focused on the effects of disruption of sexual reproduction via interactions with the estrogen and androgen nuclear receptors. Evidence gathered over the past decade now shows that the mechanisms and endpoints vulnerable to endocrine disruption are much broader than originally understood. Indeed, EDCs are now known to affect metabolism, diabetes, obesity, liver function, bone function, immune function, learning and behavior via a panoply of receptor systems and signaling pathways. In addition, the actions of EDCs on reproduction are now known to go far beyond nuclear sex steroid hormone receptors. In principal, there is virtually no endocrine signaling system or hormone pathway immune to disruption.

The majority of research on EDCs has examined the consequences of their interactions with nuclear hormone receptors (NRs), especially estrogen receptors alpha and beta (ERa, ERb), the androgen receptor (AR), among others. NRs are a superfamily of transcription factors, proteins that can bind to DNA and influence the expression of nearby genes. NRs play central roles in development, physiology and disease. In humans, there are some 48 identified NRs. Many others remain “orphans,” meaning that their endogenous ligands have not yet been identified. When activated, NRs undergo conformational changes that allow recruitment of co-regulatory molecules and the chromatin-modifying machinery of the cell. The ultimate action of NRs is to influence the transcriptional machinery of target genes. NRs also interact with other intracellular signaling pathways. Examining how chemicals bind to these receptors can provide important information concerning their endocrine disrupting potential. There are in vitro assays, some of which can be performed as part of high throughput, screening systems that can confirm chemical binding to the majority of NRs. The strengths and weaknesses of in vitro tools in predicting hazard is discussed in the section on Tier 2.

Endocrine disruption also takes place outside the cell nucleus. Many natural steroid hormones bind to cell membrane-bound receptors, which in turn partner with a variety of well-known signaling cascade proteins. Recent evidence demonstrate that EDCs may exert hormonal effects via these non-nuclear hormone receptors as well. Rather than acting as transcription factors, membrane hormone receptors act via intracellular signaling molecules to affect phosphorylation and calcium flux within a cell. Disruption of this pathway is another way by which EDCs may alter endogenous hormone actions. 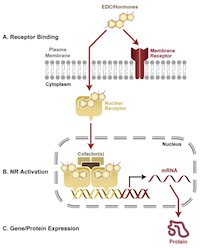 Thus, EDCs can act via multiple pathways and receptor-based mechanisms. At higher doses they may also exert receptor-independent actions via more traditional mechanisms of toxicity. Their effects are species, tissue- and cell-specific, and are influenced by metabolism.